Centre forward Thomas was an August 2021 addition to the Larne squad.

The 20-year-old Dubliner arrived at Inver Park after having spent his career to date in the League of Ireland.

Thomas made his way through underage teams at Shamrock Rovers, making his senior debut as an 18-year-old in a 2-0 win away to St Pats.

At the start of the 2021 season, Thomas moved across the capital to join Bohemians, where he would spend the first half of the campaign.

In July he arrived at Galway for a short stint, before moving north to join up with Tiernan Lynch’s men on deadline day of the summer window.

Get your tickets now 👉 https://t.co/paNsOLKAkA

Our U20s also overcame a Belfast side with a 1-0 win over Cliftonville, featuring 𝘢𝘯𝘰𝘵𝘩𝘦𝘳 Connall Curran goal 🌟🔥

We have some new items including hoodies, tracksuit tops, crew jumpers & more, as well as having a replenished existing Nike range 🤩

Get ‘access all areas’ and see all of the goals and key moments from Saturday's 3-0 win over Warrenpoint Town!🔴⚪

We return to Inver Park tomorrow evening for an East Antrim derby against @BallyclareFC in the https://t.co/NdH7OWOJ12 Senior Shield 👊🔴

We're delighted to be welcoming Harbour Motors to our pitchside advertising 🔴⚪ 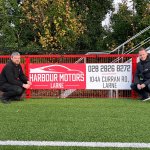 All of the behind-the-scenes action as the Invermen held league . .

Ian Cahoon speaks to striker Ronan Hale, as his penalty . .