Conor McKendry is an attacking midfielder, who arrived at the club in September 2019, having served his football apprenticeship at Ipswich Town.

The diminutive midfielder was part of the Larne Youth set-up, having also turned out for Glenavon, before heading to Portman Road in 2015.

In his four years with the Tractor Boys, Conor rose through the ranks of underage football and has also represented Northern Ireland at Under-16 and Under-17 level.

Forget #BlueMonday, we have football to look forward to this week! 😁 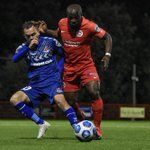 We’re raising awareness of Naomi’s story, a Larne resident who needs your help!

Tiernan Lynch stands on the touchline for the first time as Larne manager in 2017 🆚 @StranraerFC.

Interested in supporting our club and winning big prizes? 🤔

In the first edition of our new series, we hear from Cayman Islands resident @allykerrfinance 🗺