Larne will welcome Coleraine to Inver Park on Tuesday 29th June, in a game which will help both clubs in their preparations for the upcoming Europa Conference League ties.

The game – Larne’s first pre-season encounter of the year – will have a 7.30pm kick-off at Inver Park.

Oran Kearney’s men finished the 2020/21 Danske Bank Premiership campaign in 2nd place, following a 2-1 win at Inver Park on the final day of the regular season – a game which saw a number of Larne’s Academy players make their full debut.

Following the encounter with the Bannsiders, Tiernan Lynch’s men welcome Scottish Championship side Kilmarnock to Inver Park on Saturday 3rd July (3pm), ahead of the trip to Bala Town the following.

Ticketing detail for these upcoming friendlies at Inver Park will be announced in due course.

Let us know what you got in the comments 👇

We are pleased to announce that we will be moving into a new format of printed media coverage, which will replace the matchday programme 🔴 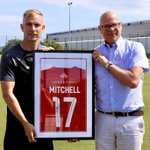