It will be all to play for against St Joseph’s at Inver Park next week after a 0-0 draw in Gibraltar on Tuesday evening.

In the hot conditions at Victoria Stadium, Larne worked hard for the draw but also had opportunities throughout the 90 minutes.

Playing into the wind in the first half, Larne threatened after 24 minutes when Mark Randall swung in a corner from the right flank and it was met by the head of Jeff Hughes 10 yards out.

However, English goalkeeper Ross Fitzsimons reacted quickly to turn it over for another corner.

The Invermen went close to breaking the deadlock 12 minutes later, once again through a headed effort.

This time Kofi Balmer’s throw-in on the right caused problems for the home side and Leroy Millar, despite finding himself in space, could only steer his header over the bar, as he ran on to the ball at pace.

Captain Boro was proving to be the Saints dangerman, with the experienced Spanish midfielder pulling the strings in the opening period.

However, it was a fellow Spainard who had the home side’s best chance of the opening 45. Domingo Ferrer unleashed a fierce, rising effort from close to 25 yards out which Rohan Ferguson had to bat away.

The best opportunities of the second period came right at the beginning and then the end of the half.

Leroy Millar once again threatened with a header on 47 minutes, with Fitzsimmons again having to be alert to tip it over the bar.

There was a late scare for Larne, when substitute Christian Aznar found space three minutes from time, but a combination of Kofi Balmer and Rohan Ferguson denied him to ensure the first leg ended scoreless. 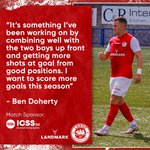